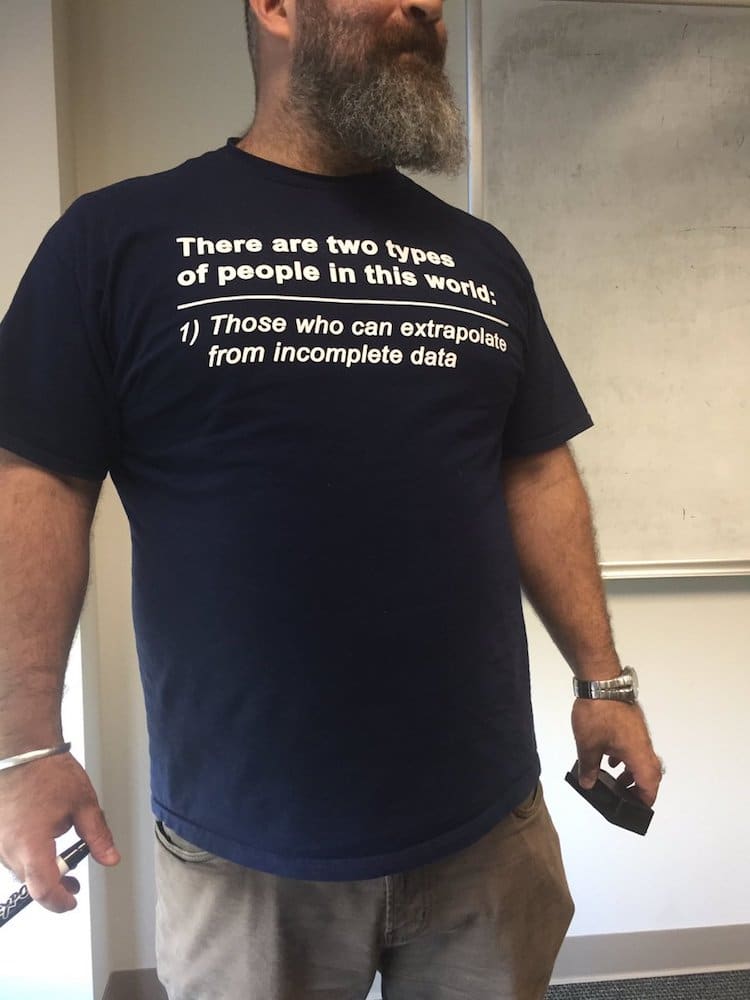 Everyone loves a good, nerdy joke, but that’s only if you actually understand it. College student Kimberly Boswell decided to share one by tweeting a photo of one of her professors at University of Miami—who, after some Internet sleuthing, appears to be Associate Economics Professor Raphael Boleslavsky. He recently came to class wearing a t-shirt with the following line written on it: “There are two types of people in this world: 1.) Those who can extrapolate from incomplete data.”

If you’re wondering whether the second part of his shirt is on the back, you wouldn’t be the only one struggling to find the punchline. Boswell laments that two of her classmate were completely stumped. To be clear: what you see is all there is. There isn’t a “second part” to the professor’s shirt because the shirt itself is presenting “incomplete data.” Therefore, you either understand this and are the “1)” in the joke, or you struggle to comprehend the humor of the statement, and could be one of Boswell’s confused classmates.

Despite the confusion this shirt caused amongst post-graduate students, plenty of people who do understand the nerdy humor have popped up with requests to own the shirt themselves. Luckily, there’s now a version of it available on Amazon.

so two of my classmates just asked our professor if his shirt is missing a 2nd part. pic.twitter.com/38ejxdUANN

Realizing there were some students in her Economics PhD class that didn’t understand the joke, she couldn’t contain her giggles.

IM INCONSOLABLE. HE JUST SAID THAT IT SEEMS OUR CLASS HAS TWO DIFFERENT TYPES OF PEOPLE! THEY STILL DONT GET IT!!!! pic.twitter.com/dPs3vdq9ot

For those that have embraced this professor’s humor, they’re eager to get their hands on their own shirt.

I've found the perfect Christmas gift for every university professor I know. https://t.co/hzxlKcAZrR

Magnificent. I want one of these https://t.co/Xfuq2Eb6Cf

always had a soft spot for “there are 10 kinds of people in the world: those that understand binary, and those that don't”

Get it? Share
Like My Modern Met on Facebook
Get Our Weekly Newsletter
Become a
My Modern Met Member
As a member, you'll join us in our effort to support the arts.
Become a Member
Explore member benefits