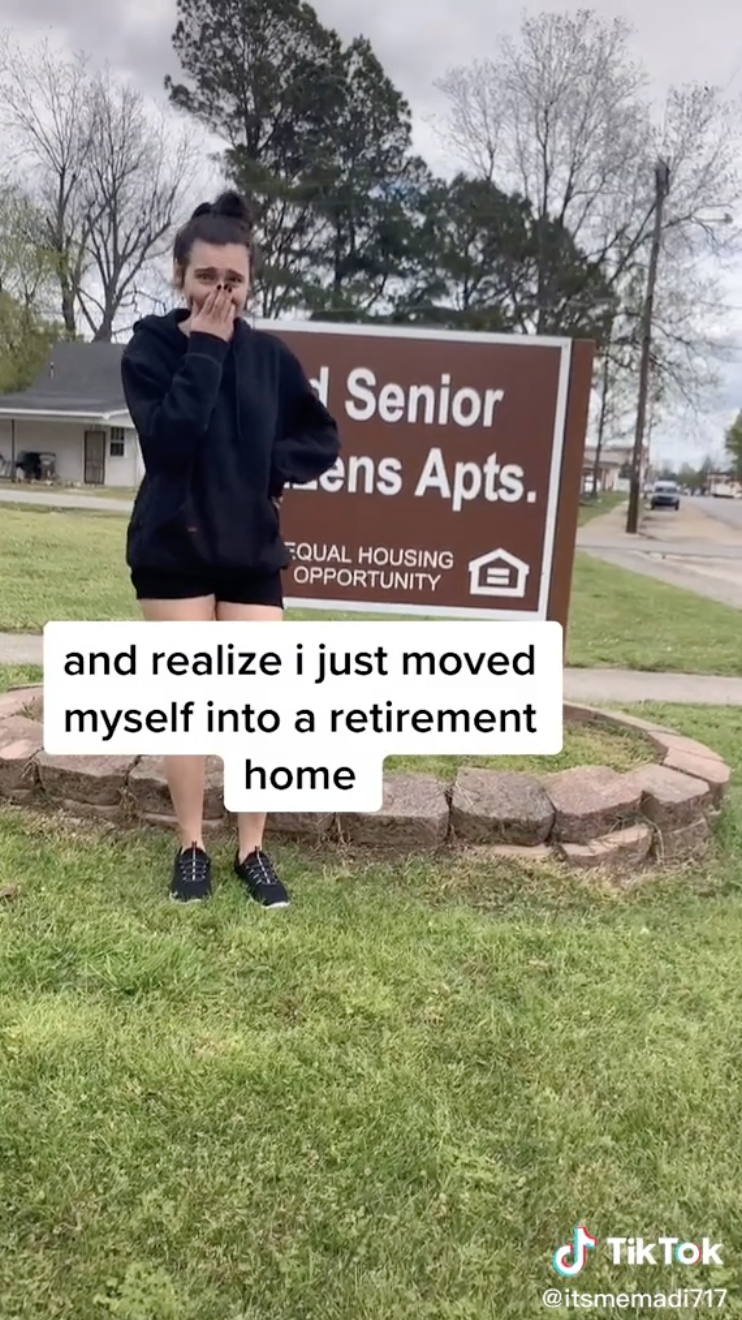 No matter how much you do your research, there’s always a certain level of uncertainty about moving to a new neighborhood. This couldn't be more true for 19-year-old Madison Kohout—she never expected to find herself living in the community she accidentally ended up in. When she was moving from Oklahoma to Arkansas, she was searching for an affordable two-bedroom apartment to call home. She came across a listing for $350 a month and immediately signed the contract without visiting it in person. When she moved in days later, she discovered her neighbors were all over 65 years old. She soon realized that she had moved into a senior living complex.

“The first week of moving here was crazy!” Kohout revealed. “I was busy with finding a job and setting up my apartment, I didn’t even notice! I thought it was a bit weird that all of my neighbors were significantly older than me.” While she was exploring her new surroundings, the teenager came across a sign that said “Senior Living Apartments.” Once she saw the sign, everything became clear. She says, “I was like, ‘Oh, my goodness, I can’t believe I did this.’”

Even though the apartments are designed for seniors, they were advertised as “equal opportunity housing,” meaning they do not discriminate based on age. Therefore, Kohout was able to move in without question. Luckily, she saw the funny side, and posted a now-viral video about the mix-up on TikTok. She’s since been sharing more videos about what life is like living among senior citizens, and it’s been more positive than she could have imagined.

According to Kohout, her new neighborhood is nice and quiet, since her neighbors are always sleeping by the time she gets home. The teenager also claims she can play music as loud as she likes, since some of her neighbors are hard of hearing. Kohout also reports that she’s been warmly welcomed by the other residents, and some of them have even invited her over for dinner and left snacks at her door. Kohout says, “It’s like having extra sets of grandparents.”

Check out Kohout's TikTok videos below and follow her for more updates on her life. If you ask us, her new neighborhood seems to be pretty great!

Despite the blunder, she feels totally at home in her new neighborhood.

@itsme.madiiiiReply to @2020broughtmehere I am a bit dramatic LOL but in all honesty I am SO blessed, I really do love it here ##fyp ##moving ##apartment ##seniorcit♬ The Office – The Hyphenate

@itsme.madiiiiReply to @spottedbear UPDATE ON THE APARTMENT!! DAY IN THE LIFE! ##fyp ##WidenTheScreen ##apartment ##moved ##seniorcitizens ##life ##comedy♬ Send Me on My Way – Vibe Street

Senior Citizens Reveal What Tattoos Look Like on Aging Skin