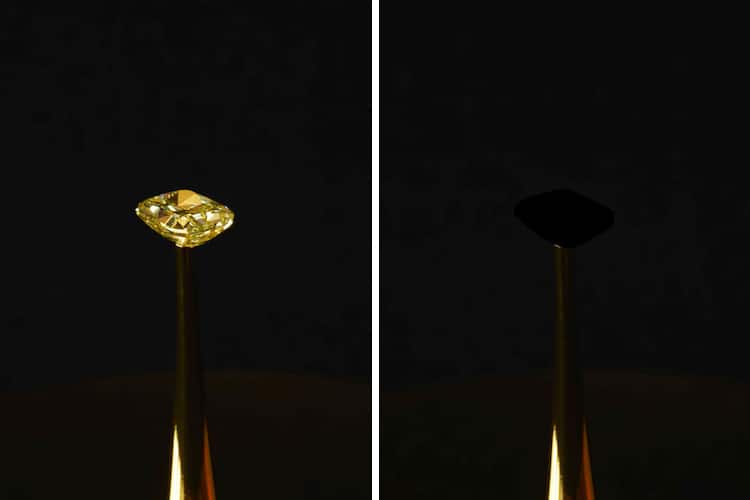 Move over, Vantablack—there's a new blackest black in town. Engineers at MIT have developed a new material that's 10 times blacker than anything previously created. This means that Anish Kapoor, who caused a stir when he purchased the rights to Vantablack in 2016, will no longer control usage of the blackest black in the world. Made of carbon nanotubes, this new material captures 99.995 percent of all incoming light.

By vertically aligning the microscopic carbon filaments, the MIT engineers have made something akin to a fuzzy forest of trees that they then grew on a piece of chlorine-soaked aluminum. The results were recently published in a scientific journal and also put to the test at the New York Stock Exchange in an exhibition called The Redemption of Vanity.

The artwork on display was conceived by artist Diemut Strebe in collaboration with MIT professor of aeronautics and astronautics Brian Wardle. To really put this new black to the test, they set about covering one of the shiniest objects they could think of—a 16.78-carat natural yellow diamond. Worth $2 million, the diamond was coated in the material and the effect is incredible. The diamond appears like a black void, so dark that it stands out brilliantly against the regular black background.

“There are optical and space science applications for very black materials, and of course, artists have been interested in black, going back well before the Renaissance,” Wardle says. “Our material is 10 times blacker than anything that’s ever been reported, but I think the blackest black is a constantly moving target. Someone will find a blacker material, and eventually we’ll understand all the underlying mechanisms, and will be able to properly engineer the ultimate black.”

Interestingly, the discovery was a bit of an accident. The team hadn't set out to find something blacker than Vantablack. They were simply looking for a way to grow carbon nanotubes on materials that would boost their electrical conductivity. It was only when the tubes were growing on the treated aluminum that they noticed just how black the substance became. From there, they tested its reflective properties and were pleasantly surprised by what they found.

Currently, the researchers are applying for a patent for their technology and while there's no word on when and if this material will be made available to the public, it will certainly make many who were upset over Kapoor's monopoly on Vantablack quite pleased. If you are itching to try out this incredibly black black, give Stuart Semple's Black 2.0 a try. Developed in response to Kapoor's purchase of Vantablack, it may not absorb quite as much light, but it's still quite impressive.

All images via MIT.

Color-Changing Tattoos May Change the Way We Monitor Health Issues