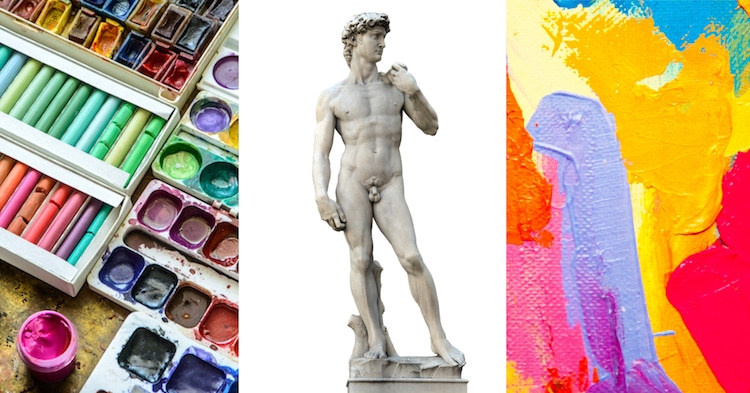 Like any creative field, art history has its own language. While this reality can be overwhelming for aspiring art historians, having a handy glossary of art terms can make analyzing a work of art a lot less intimidating.

In this list, you'll find 25 words that will help you discuss art with ease. Ranging from general concepts, like brushwork and composition, to specific techniques, including chiaroscuro and trompe l'oeil, this arsenal of art terms offers everything you need to make the most out of your next museum visit.

Analyze art like a professional with this art history glossary.

Breaking away from the figurative representation of objects, abstract art reimagines imagery as a study of the relationship between shape, form, color, and line. Abstraction occurs on a continuum, including the fractured-yet-recognizable forms of Cubism and the totally non-pictorial nature of Abstract Expressionism.

As known as atmospheric perspective, this method for creating depth in two-dimensional artworks focuses on the idea that the further an object is from the foreground, the lighter in tone and hue the color will be. By exaggerating the difference in these tones, artists can use aerial perspective to create drama and establish the illusion of space on the picture plane.

This artistic form or medium uses a mix of materials that create three-dimensional layers from a fixed based. The usage of different materials makes it similar to collage, but in a three-dimensional form. Assemblage has its origins in Cubism and the work of artists like Man Ray and Vladimir Tatlin, who often used found objects in their artwork.

The French term avant-garde literally translates to “advance guard,” but is used to describe artworks, movements, or artists that are experimental and forward-thinking.

Biomorphic artwork is art that, while remaining abstract, evokes the form and shape of natural and living organisms. The term was first used relating to art in the mid-1930s and has been connected with Surrealism and Cubism. Antoni Gaudí's Sagrada Familia is an example of architecture that has been characterized as biomorphic.

Brushwork refers to the way a painter applies paint to a surface. It is typically characterized by the size, texture, and precision of the strokes. For instance, brushstroke may be described as “tight” or “loose” depending on how visible they are to the naked eye. 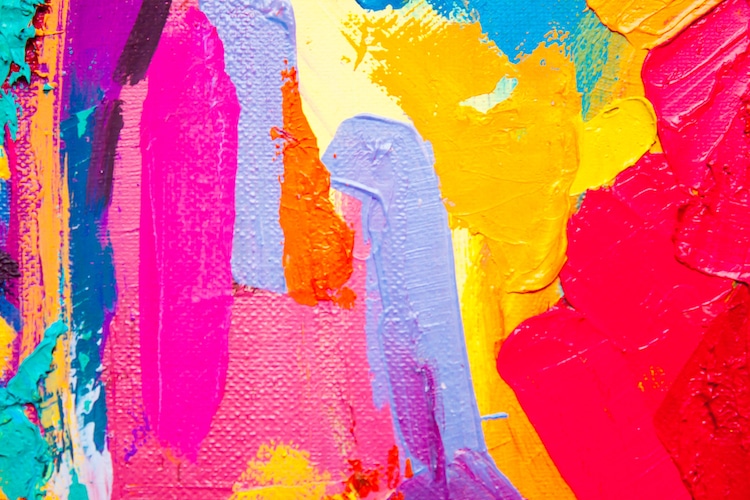 Italian for “light-dark,” chiaroscuro is the use of strong contrasts between luminosity and shadow to achieve a sense of volume and dimensionality. This unique technique was developed during the Italian Renaissance by Leonard da Vinci, the Baroque period by Caravaggio, and the Dutch Golden Age by Rembrandt.

The composition of a work of art is the way in which its visual elements are arranged, especially in relationship to one another.

This 20th-century art form developed in the 1960s, when artists began to emphasize ideas and concepts over the finished product. Art that is conceptual breaks free from all the standard rules and can take any form from sculpture and painting to happenings and performances.

As the outline of something, the contour is one of the building blocks of drawing. Using different contour lines can dramatically change the way an artwork appears and is most evident in line art. The Dance by Henri Matisse is just one example of a work of art known for its distinct contours.

In sculpture, contrapposto (“counterpose” in Italian) is an asymmetrical posture in which most of a figure's weight is distributed onto one foot. This results in a realistic stance, as famously evident in Michelangelo's David statue. 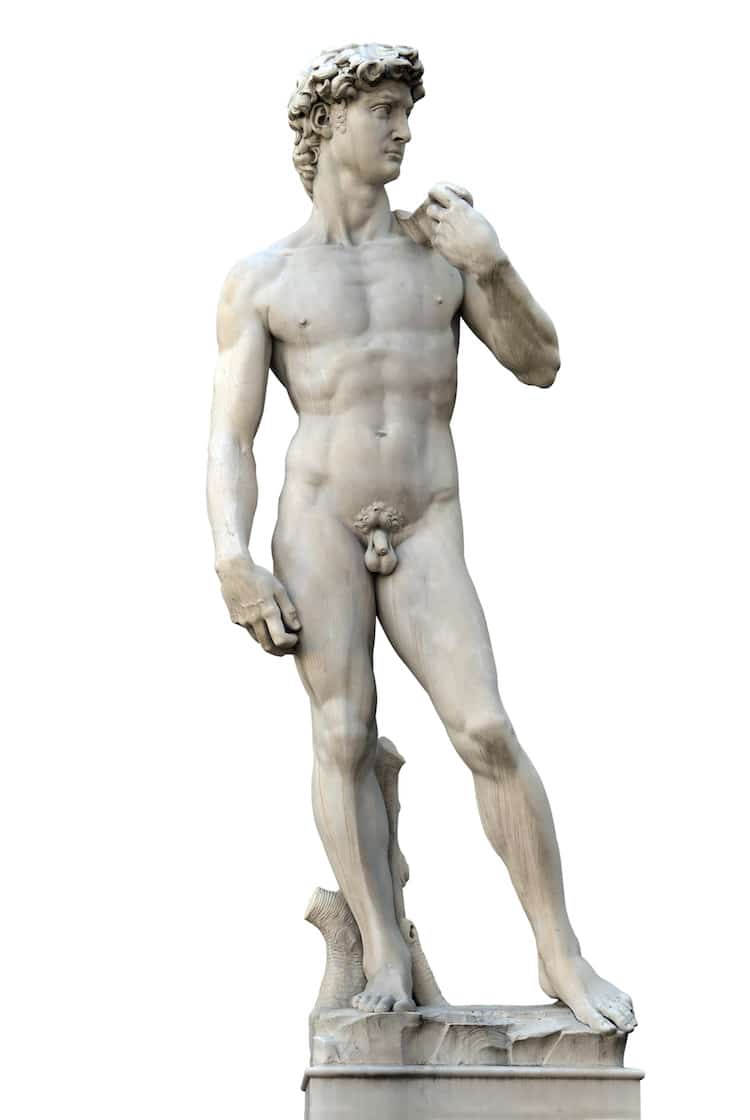 A work of art is considered figurative when its subject matter is representational.

The foreground of a work of art is the part of the composition that is closest to the viewer. It is typically discernible from the background, which appears to be further away.

Foreshortening is a technique in which an artist distorts perspective to evoke an illusion of depth. Foreshortened subjects often appear to recede into the picture plane. 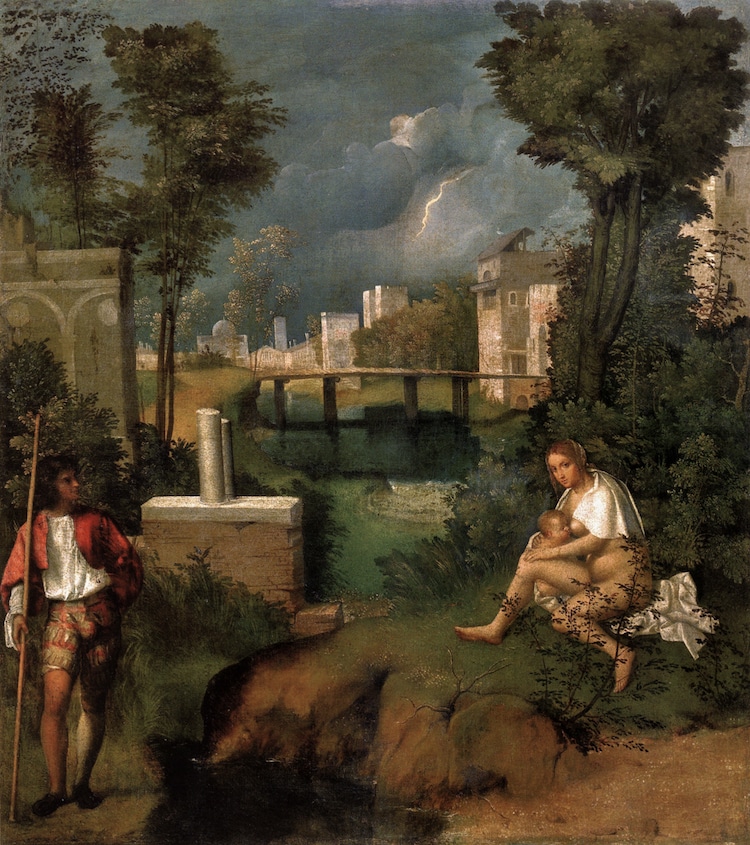 A genre refers to a type of art (typically painting). Examples of genres include landscape and still life.

Iconography refers to the subject matter, or images, used to convey meaning or communicate a message in a work of art.

This Italian word for “mixture” refers to thick layers of paint used to create texture. While it was first used by Venetian painters during the Italian Renaissance, it really took hold in the 19th century. Renowned landscape painter J.M.W. Turner used impasto to build layers of color and drama in his work. Painters often use palette knives for this technique, which is meant to emphasize their talent manipulating their chosen medium.

A medium is the material used to create art. Examples of mediums are watercolor paint, oil, pastel, marble, and charcoal. 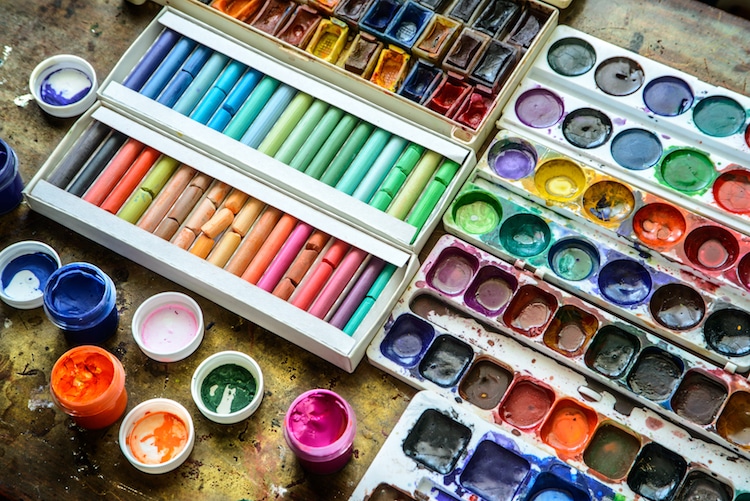 As a movement, the term “modern” refers to art created between the onset of Impressionism and Pop Art, which ushered in contemporary art. On a more general scale, however, “modern” can mean current or cutting-edge.

In the visual arts, a motif is an element of the iconography. In paintings, a motif can refer to any pictorial feature of the composition. In the decorative arts and architecture, it often denotes a recognizable symbol that repeats.

Narrative, in terms of art history, is the visual storytelling that occurs within a piece of art. While not every piece of art will have a clear story, narrative art asks painters and sculptors to use visual cues in order to lead viewers through a series of events.

Pentimento (“repentance” in Italian) refers to the presence of evidence that an artist has painted over a previously-rendered subject. In The Old Guitarist by Pablo Picasso, for example, the vague outline of a woman's face is apparent beneath the final brushstrokes. 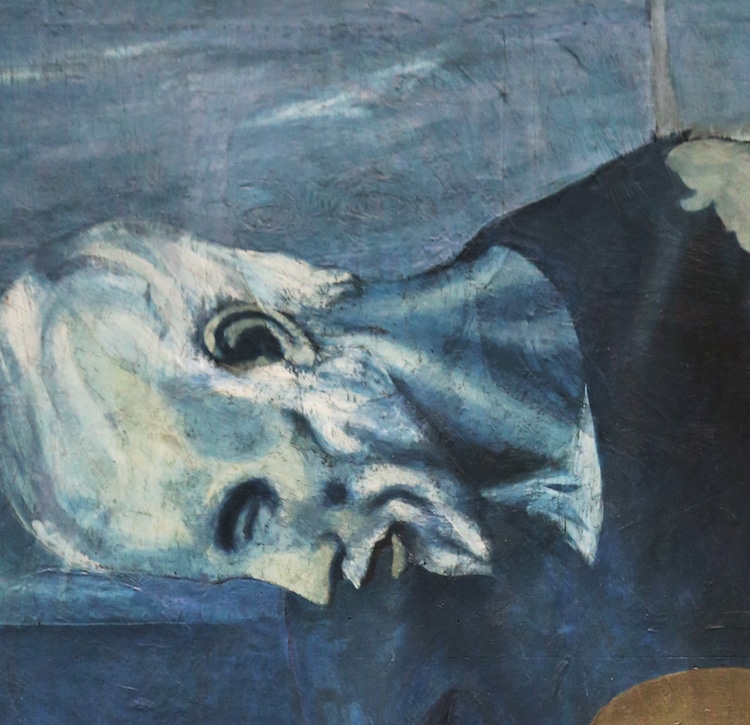 Perspective is the representation of 3-dimensional depth and space on a flat surface. There are two main types of perspective: linear and atmospheric. Linear perspective employs intersecting lines and vanishing points as a means to make objects appear far away. According to Leonardo da Vinci in A Treatise on Painting, atmospheric perspective, on the other hand, illustrates the idea that “colors become weaker in proportion to their distance from the person who is looking at them” through tonal changes.

Scale refers to the size of an object in relation to another. Often, as in the case of large-scale paintings, this comparison is based on the portrayed object's real-life size.

Predominantly associated with the paintings of Leonardo da Vinci, sfumato (derived from fumo or “smoke” in Italian) is a method of shading and color-blending that evokes a soft, “smoky” haze. This technique is apparent in the blurred background and softly-defined facial features of the Mona Lisa. 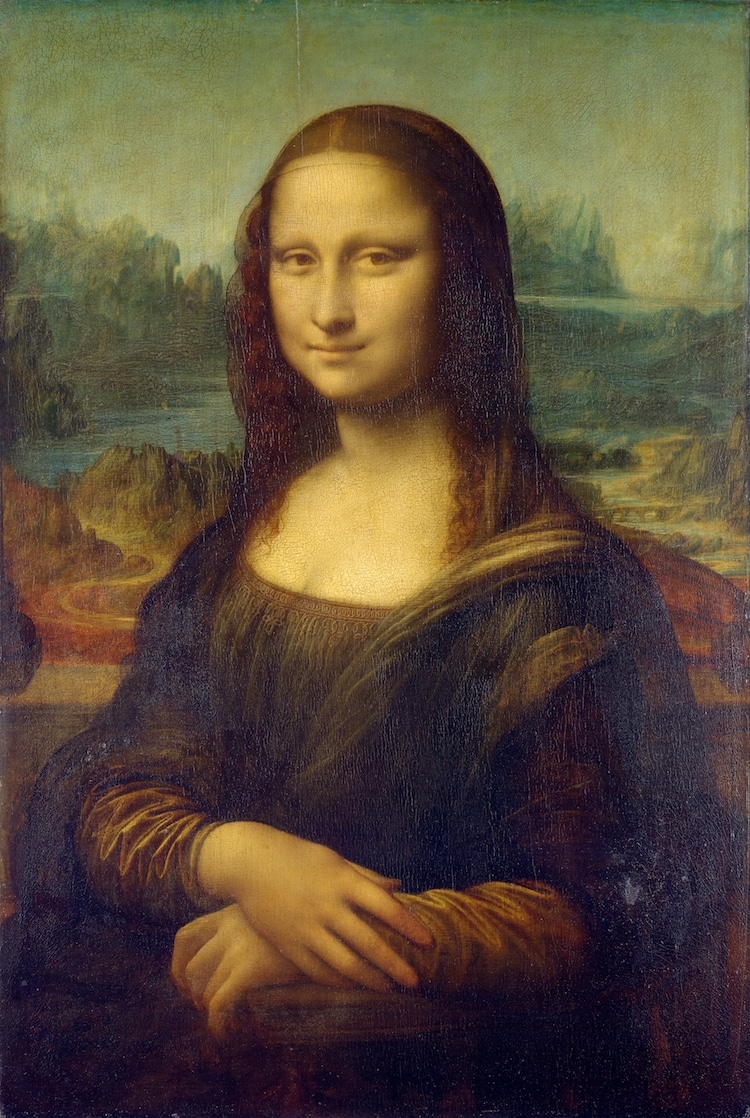 A work of art's style is a classification of its visual appearance. Often, style is characterized according to the distinctive aesthetic approach of an individual artist, art movement, period, or culture.

Tone refers to the lightness or darkness of a particular color.

In French, trompe l'oeil means “deceive the eye.” It is a technique that creates optical illusions of three-dimensionality by employing eye-catching lifelike imagery. 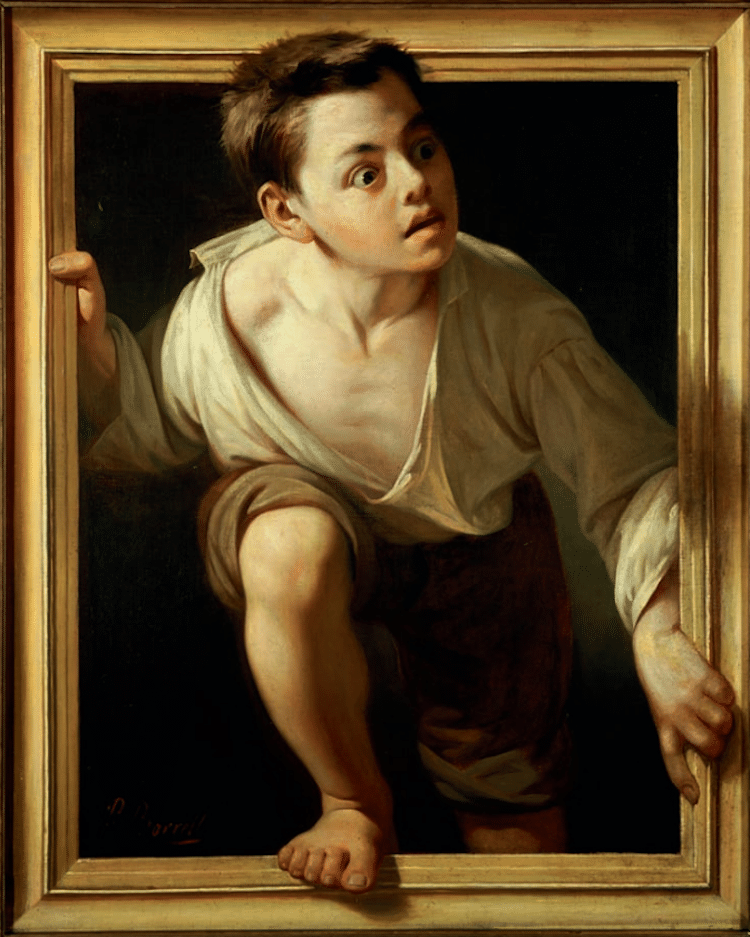