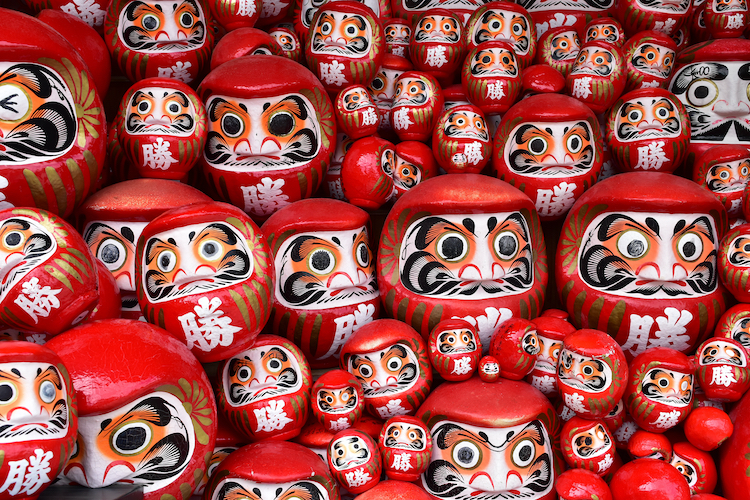 Although Japan has many symbols of luck and good fortune, the Daruma doll is undoubtedly a favorite. Believed to have supernatural and psychological powers, the traditional papier-mâché figures are used to help their owners achieve their goals.

Read on to discover the history and meaning behind these good luck charms.

What is a Daruma doll?

A Daruma doll is a hollow, round, Japanese doll that dates back to the 17th century. Traditionally, farmers in the city of Takasaki crafted the first versions of the figures as charms to be blessed by monks. They believed the dolls would bring them a good harvest and selling them was also a way to supplement their income during tough economic times. Over the next few decades, the practice of using the Daruma for good luck spread across the country.

Today, Daruma dolls are typically bought at the beginning of the Japanese new year with the belief that they can help you achieve your goals. They can be found in the windows of Japanese stores, on the shelves of restaurants, and inside many homes. They are also a popular souvenir for people visiting Japan who want to bring a good luck charm home.

Who do Daruma dolls represent? 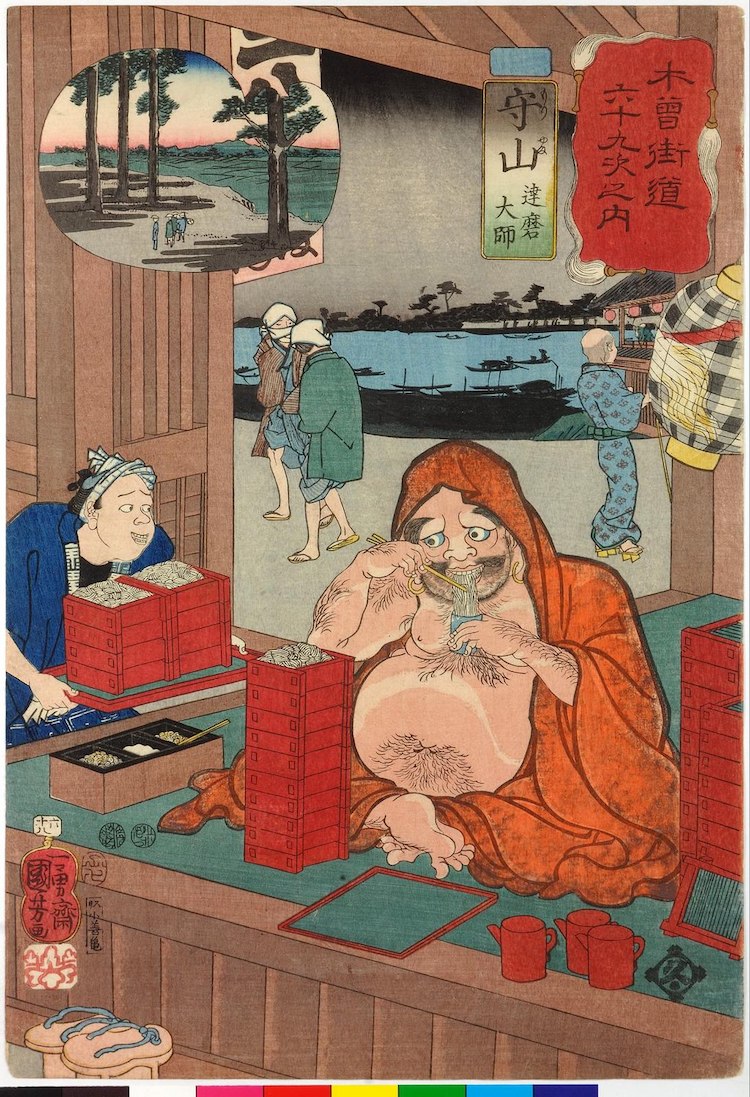 The Daruma is modeled after Bodhidharma (or Daruma-Daishi in Japanese), a monk who lived in the 5th to 6th century. He is credited as the founder of Zen Buddhism and a type of sitting meditation called Zazen.

Legend has it that Bodhidharma stayed in deep meditation for nine years with his eyes open staring at a blank wall. He closed his eyes just once and was so furious with himself for breaking perseverance that he cut his own eyelids off. As they fell to the ground, green tea leaves sprouted where they landed. This is why many Buddhist monks drink green tea to stay awake.

In addition to losing his eyelids, Bodhidharma’s arms and legs simply wasted away after years of immobility. But Bodhidharma’s fearless spirit, however, remained. And today, Daruma dolls—with their wide-open eyes and limbless forms—represent the folklore figure. 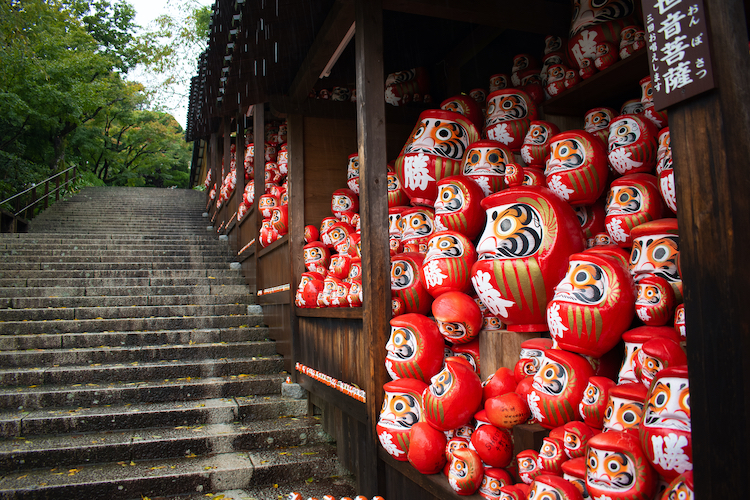 The Daruma’s beard and eyebrows are painted to look Bodhidharma’s facial hair, but they also have significant meaning. The eyebrows are drawn in the shape of cranes while the beard is designed to look like turtles. This is because the two creatures represent longevity. The idea comes from a Japanese proverb that says, “The crane lives 1,000 years, the turtle 10,000.”

The rounded body of the Daruma doll represents Bodhidharma’s limbless form in folklore, but there’s more meaning to it. The original dolls were crafted to swing back into the upright position if they were knocked over. This is a reminder of perseverance: no matter how many times you’re knocked down, you should always get back up again. This also references the Japanese expression nanakorobi yaoki, meaning “seven times down, eight times up.” 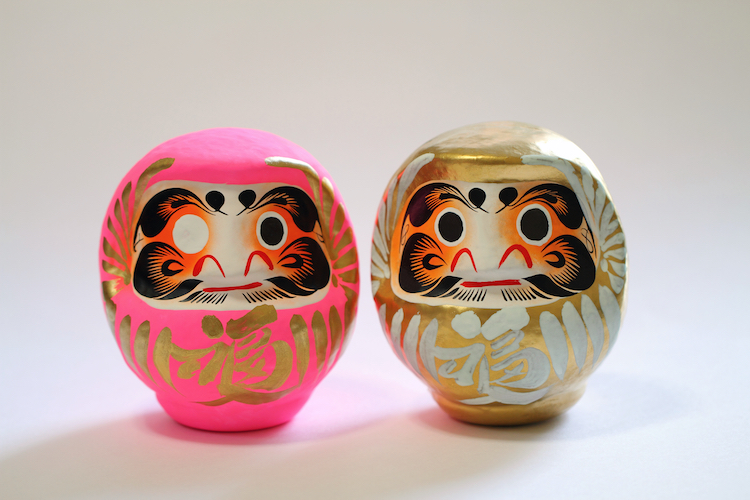 The Kanji characters for “luck,” “fortune,” and “perseverance,”  are sometimes written under the Daruma’s face. However, some people paint their own personal wish onto their doll as a reminder to themselves of their goal.

You can find Daruma dolls decorated in all kinds of colors, but the most common hue is red. Historians have yet to agree on why, but some suspect that red represents the color of Bodhidharma’s robe. Others believe that the color red signifies supernatural powers. In the past, Japanese people would have worn red clothing or jewelry or decorated their doors with red ropes. This was an attempt to chase away the “smallpox god” from coming into their homes and giving them the illness. Throughout history, Daruma dolls were used to defend against illnesses and help with recovery.

Daruma dolls can also be found in other colors including white, gold, and pink. The different colors indicate a different goal or wish. Below is what some of the hues are believed to signify. However, it should be noted that there are differing opinions on this, so this list shouldn’t be taken as fact.

How are Daruma dolls made? 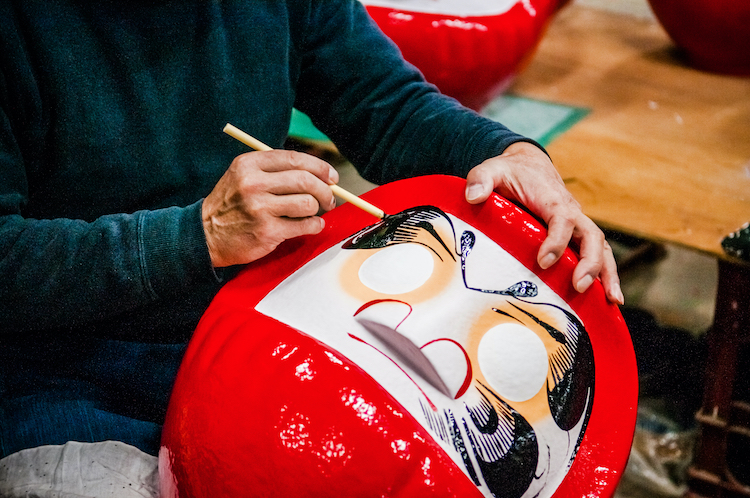 Around 80% of Japan’s Daruma dolls are made in the city of Takasaki that is north of Tokyo. They are crafted from a special kind of handmade papier-mâché called washi. Making washi is an art of its own and the labor-intensive craft is even registered as a UNESCO intangible cultural heritage. The material is made from fibers found in the inner bark of the gampi tree, the mitsumata shrub, or the paper mulberry (kōzo) bush.

Once the rounded form of the Daruma is made, each one is hand-painted by expert artisans. Since every doll is made by hand, each one is entirely unique.

How to Use a Daruma Doll 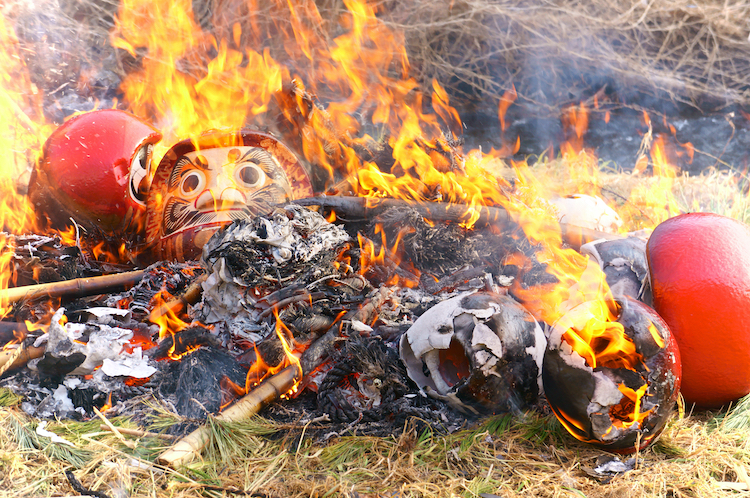 Once your Daruma has been assigned a specific wish, you paint on the first eye. You then display the doll somewhere visible in your home or workplace so that you can be reminded to work towards your goal every day. Once that goal is achieved, the second eye is painted in, and the wish is sometimes written on the back.

To properly harness the power of a Daruma doll, you are supposed to return it to the temple from where you bought it after one year. Even if your goal hasn’t been achieved yet, you must burn the doll in order to free the god. There is even a ceremony called daruma kuyo or dondoyaki in several temples across Japan, where thousands of people go to have their dolls blessed before a mass ritual burning. You can then buy a new doll as a renewal of your vow and the process starts again.