In this spectacular image, observations using infrared light and X-ray light see through the obscuring dust and reveal the intense activity near the galactic core of the Milky Way. Note that the center of the galaxy is located within the bright white region to the right of and just below the middle of the image. The entire image width covers about one-half a degree, about the same angular width as the full moon. (Photo: NASA/JPL-Caltech/ESA/CXC/STScI)

In an effort to keep the public engaged and remain transparent about its activities, NASA has a vast archive of photos and videos available online. Whether you are an astronomy buff or simply like looking at the stars, there's plenty of material to keep you interested. The best part is—it's all copyright free (as long as it's not used commercially)! Whether you want to explore the archives of NASA's historic missions or catch up on what's happening currently, there's no shortage of items to explore.

There are multiple ways to make your way through NASA's media collection. In general, there's a media repository where you can search by keyword and filter for images, video, and audio. Gems include stunning photos of the Milky Way taken by the Hubble Telescope, astronauts like Edward White—who was the first American astronaut to walk in space—on missions, and incredible images of Saturn snapped during the historic Cassini mission.

Even more content can be found on the Jet Propulsion Laboratory's Photojournal. Here it's possible to look at the latest images captured on different ongoing missions. You can  also look at photos related to individual planets. If you really want to get up close and personal with our own planet, the Visible Earth website is NASA's full catalog of photos and animations related to Earth. And, of course, individual mission pages will have their own media libraries, meaning that it's quite easy to see what the Juno Probe or InSight Lander is up to at the moment.

And, as if that weren't enough, NASA also has material available on other platforms. The NASA on the Commons account on Flickr has over 3,000 pieces of media without copyright restriction, giving insight into everything from astronaut training to portraits of NASA elite like Mary Jackson, the organizations first black female engineer.

NASA has a huge range of free media files available online, including photos taken by the Hubble Telescope. 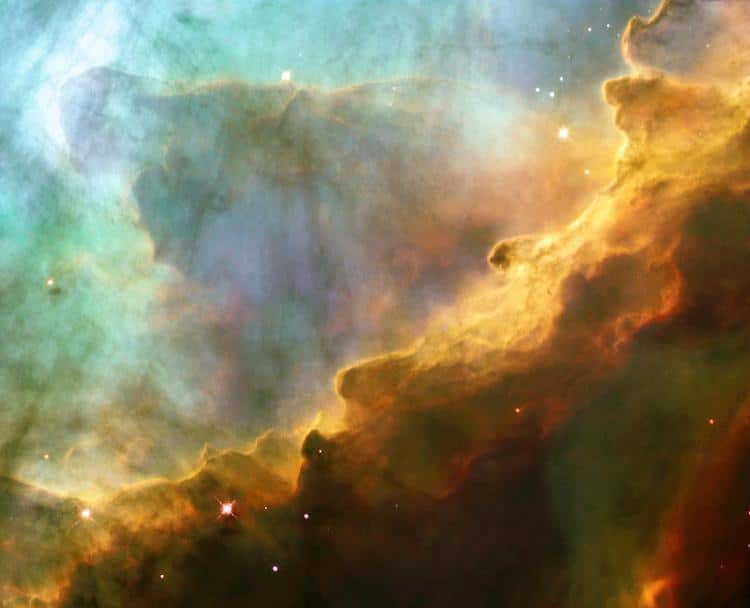 In this sturning image provided by the Hubble Space Telescope (HST), the Omega Nebula (M17) resembles the fury of a raging sea, showing a bubbly ocean of glowing hydrogen gas and small amounts of other elements such as oxygen and sulfur. The nebula, also known as the Swan Nebula, is a hotbed of newly born stars residing 5,500 light-years away in the constellation Sagittarius. The wavelike patterns of gas have been sculpted and illuminated by a torrent of ultraviolet radiation from the young massive stars, which lie outside the picture to the upper left. The ultraviolet radiation is carving and heating the surfaces of cold hydrogen gas clouds. The warmed surfaces glow orange and red in this photograph. The green represents an even hotter gas that masks background structures. Various gases represented with color are: sulfur, represented in red; hydrogen, green; and oxygen blue. (Photo: MSFC) 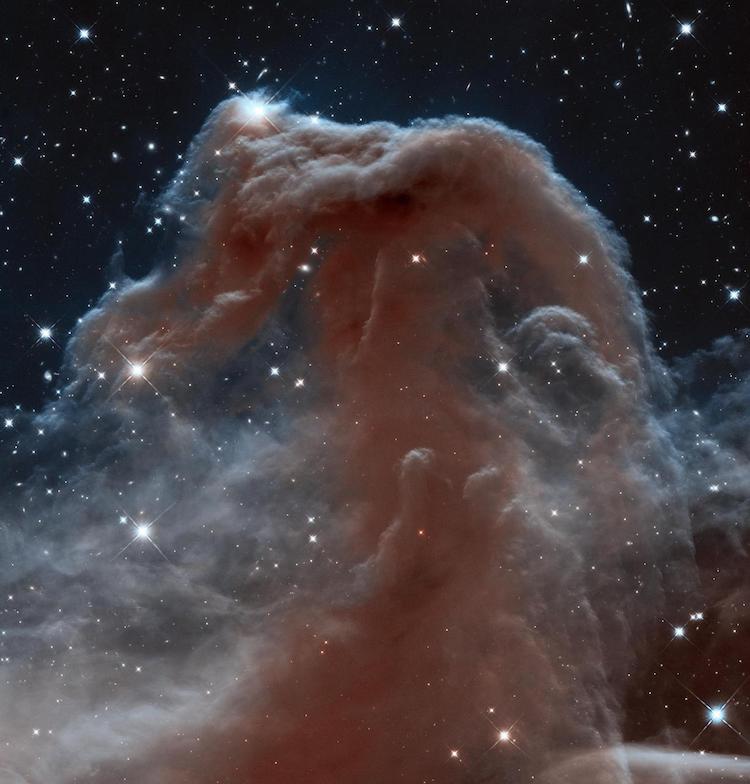 Backlit wisps along the Horsehead Nebula upper ridge are being illuminated by Sigma Orionis, a young five-star system just off the top of this image from the Hubble Space Telescope. (Photo: JPL/NASA/ESA/STScI)

There are also archival photos of historic NASA missions. 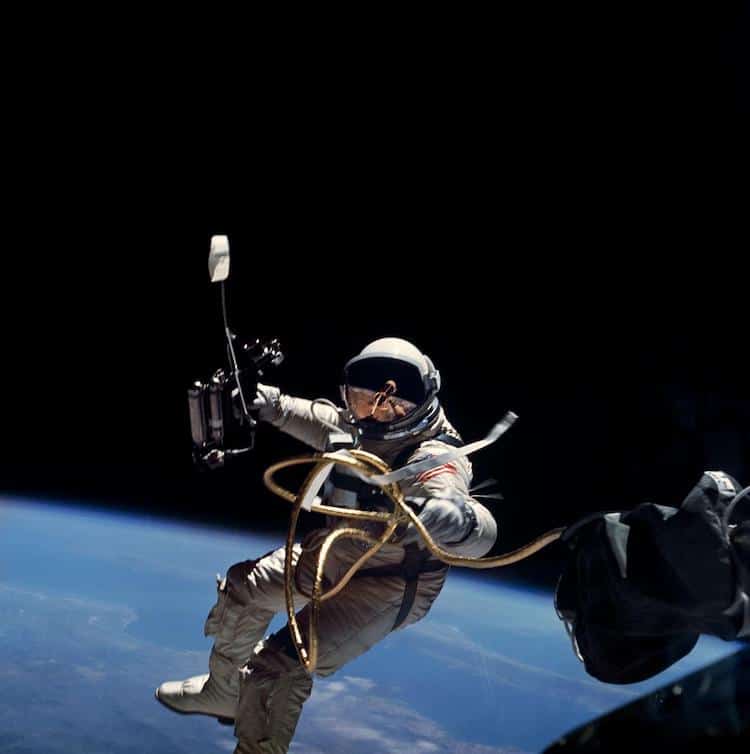 Astronaut Edward H. White II, pilot on the Gemini-Titan 4 spaceflight, is shown during his egress from the spacecraft. His face is covered by a shaded visor to protect him from the unfiltered rays of the sun. White became the first American astronaut to walk in space. He remained outside the spacecraft for 21 minutes during the third revolution of the Gemini-4 mission. He wears a specially designed spacesuit for the extravehicular activity (EVA). (Photo: JSC) 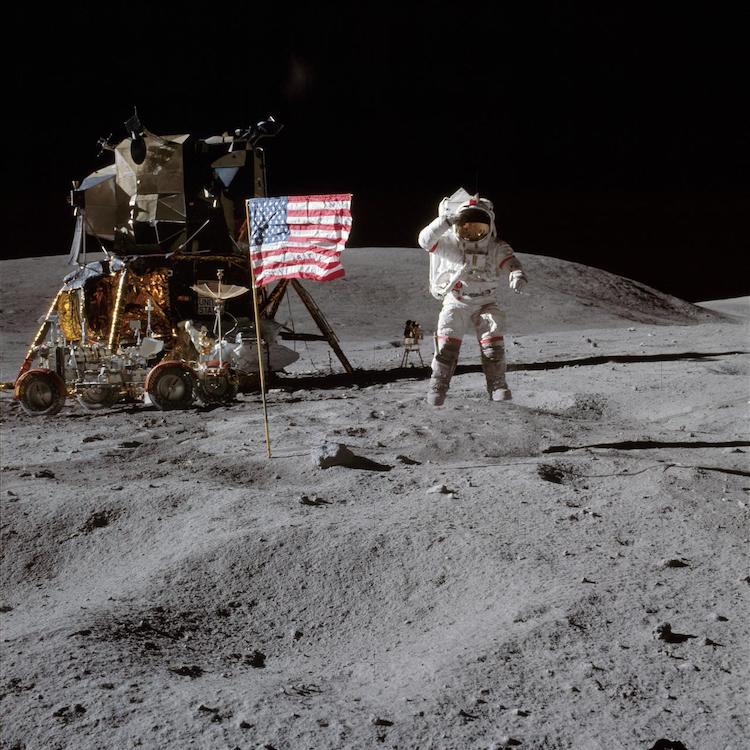 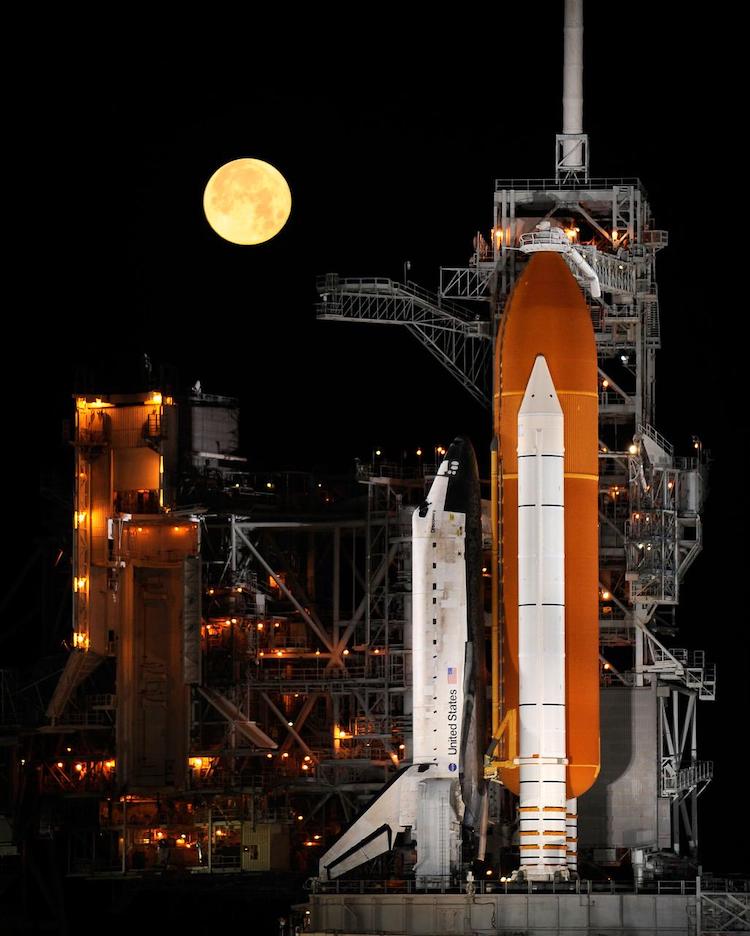 The public is invited to look in on NASA's current missions to get a deeper understanding of America's space program. 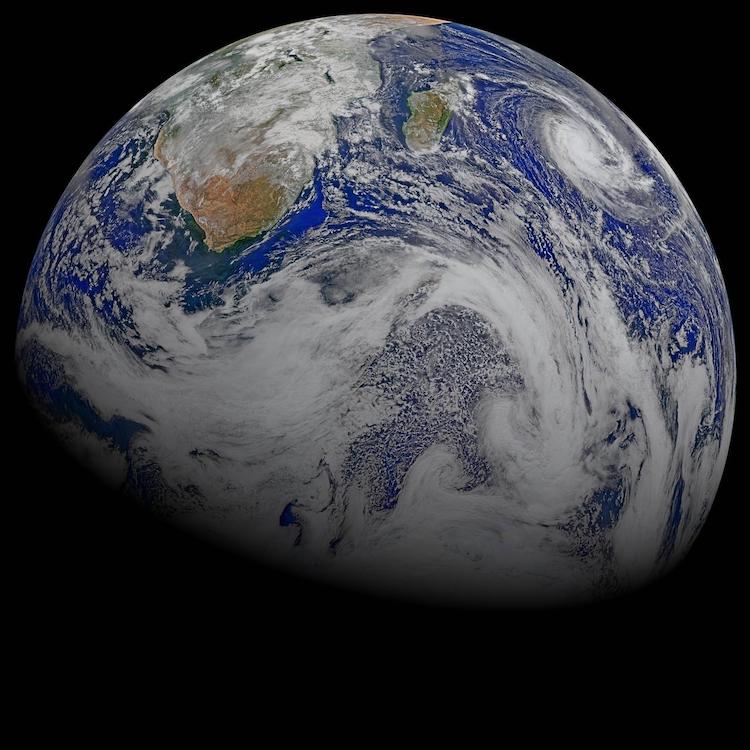 This composite image of southern Africa and the surrounding oceans was captured by six orbits of the NASA/NOAA Suomi National Polar-orbiting Partnership spacecraft on April 9, 2015, by the Visible Infrared Imaging Radiometer Suite (VIIRS) instrument. Tropical Cyclone Joalane can be seen over the Indian Ocean. (Photo: GSFC) 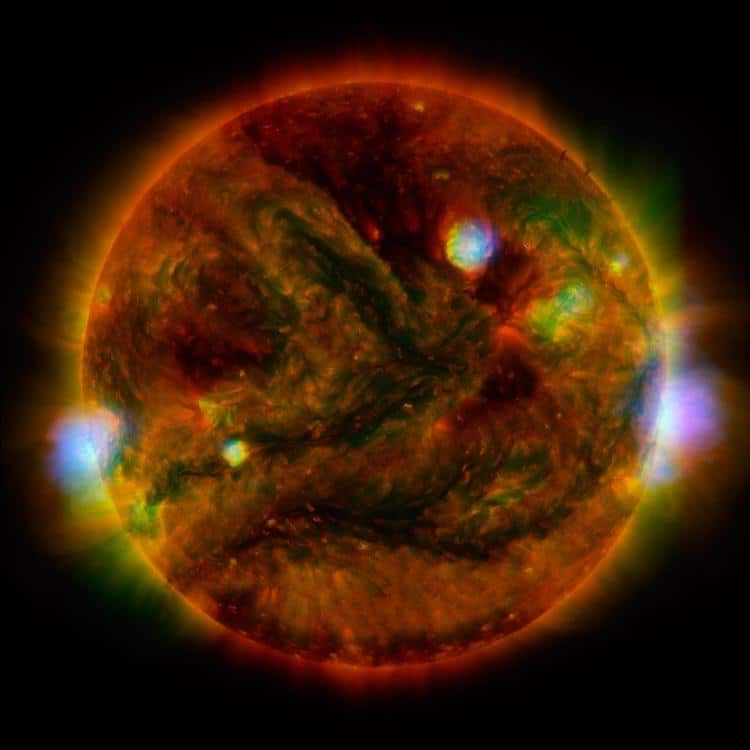 Flaring, active regions of our sun are highlighted in this image combining observations from several telescopes. High-energy X-rays from NASA's Nuclear Spectroscopic Telescope Array (NuSTAR) are shown in blue; low-energy X-rays from Japan's Hinode spacecraft are green; and extreme ultraviolet light from NASA's Solar Dynamics Observatory (SDO) is yellow and red. All three telescopes captured their solar images around the same time on April 29, 2015. The NuSTAR image is a mosaic made from combining smaller images. The active regions across the sun's surface contain material heated to several millions of degrees. The blue-white areas showing the NuSTAR data pinpoint the most energetic spots. (Photo: NASA/JPL-Caltech/GSFC/JAXA) 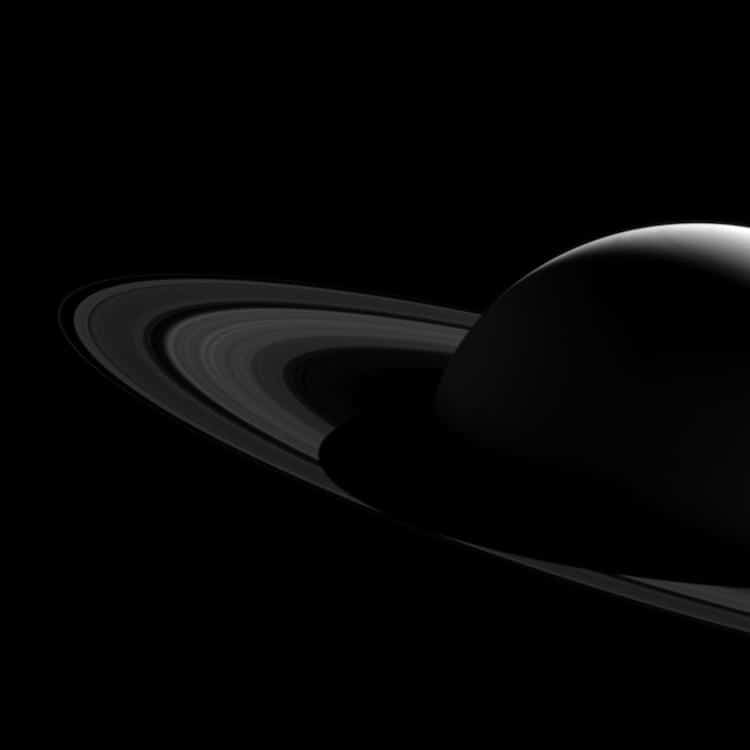 Saturn's shadow stretched beyond the edge of its rings for many years after NASA's Cassini first arrived at Saturn, casting an ever-lengthening shadow that reached its maximum extent at the planet's 2009 equinox. This image was captured in 2015. (Photo: NASA/JPL-Caltech/Space Science Institute) 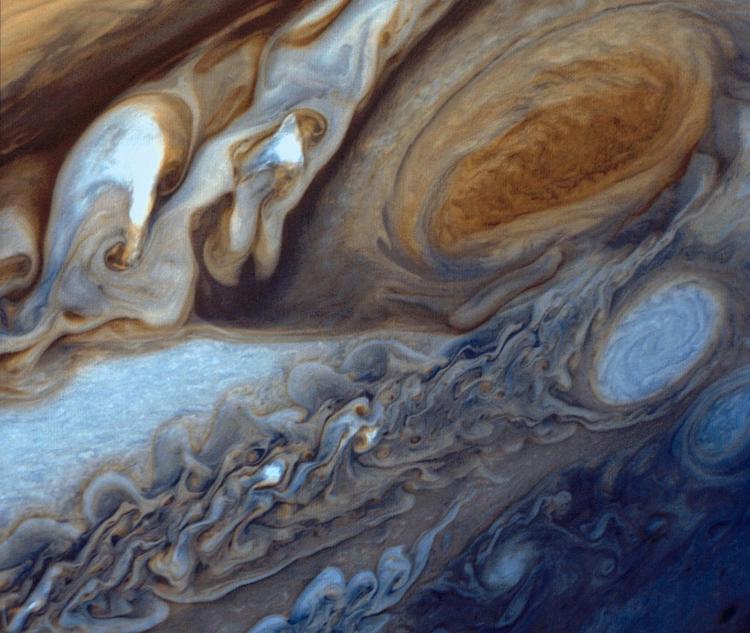 This view of Jupiter was taken by Voyager 1. This image was taken through color filters and recombined to produce the color image. This photo was assembled from three black and white negatives by the Image Processing Lab at Jet Propulsion Laboratory. (Photo: JPL) 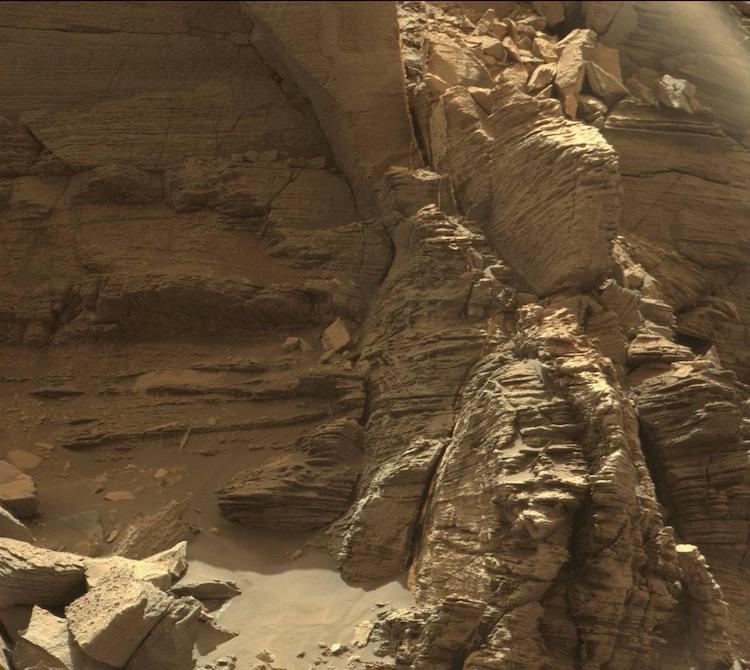 This view from the Mast Camera (Mastcam) in NASA's Curiosity Mars rover shows an outcrop with finely layered rocks within the ‘Murray Buttes' region on lower Mount Sharp. (Photo: NASA/JPL-Caltech/MSSS)

Excited by this resource? Share
Like My Modern Met on Facebook
Get Our Weekly Newsletter
Become a
My Modern Met Member
As a member, you'll join us in our effort to support the arts.
Become a Member
Explore member benefits

Excited by this resource?