It's no secret that the bushfires raging across Australia have been devastating for all walks of life. Nearly 30 people have lost their lives and several thousand homes have been destroyed. But no one has felt the heat of these wildfires more than the animals who thrive in nature. Animal hospitals across the country are packed with wildlife who have been injured in the fires, and many species have had to migrate to new land as their habitats were destroyed.

In an effort to ease the transition for those animals who have survived, but now find themselves without their usual food sources, the New South Wales (NSW) government has gotten creative. Operation Rock Wallaby is a mission to ensure that one vulnerable species survives. By airdropping over 2,000 pounds of food—mainly carrots and sweet potatoes—officials are hoping to give brush-tailed rock-wallabies enough nutrition to make it through this time of transition.

NSW Minister for Energy & Environment Matt Kean has been posting about Operation Rock Wallaby and explained the thought process behind the mission. “The provision of supplementary food is one of the key strategies we are deploying to promote the survival and recovery of endangered species like the brush-tailed rock-wallaby. Initial fire assessments indicate the habitat of several important brush-tailed rock-wallaby populations was burnt in the recent bushfires. The wallabies typically survive the fire itself, but are then left stranded with limited natural food as the fire takes out the vegetation around their rocky habitat.”

This dire situation has led to the most widespread rock-wallaby food drop that the NSW government has ever conducted. These small marsupials live on rock piles and cliff lines and had been facing hardships even before the fires. As one of 15 wallaby species in Australia, they were already endangered in NSW. In fact, wallabies, in general, are on the decline, as most native species have disappeared. This makes Operation Rock Wallaby even more vital.

To put things into perspective, the World Wildlife Fund estimates that 1.25 billion animals have been killed in the bushfires. This not only includes those who perished in the flames, but animals that have been injured or seen their homes destroyed.

How can you help these animals in need? 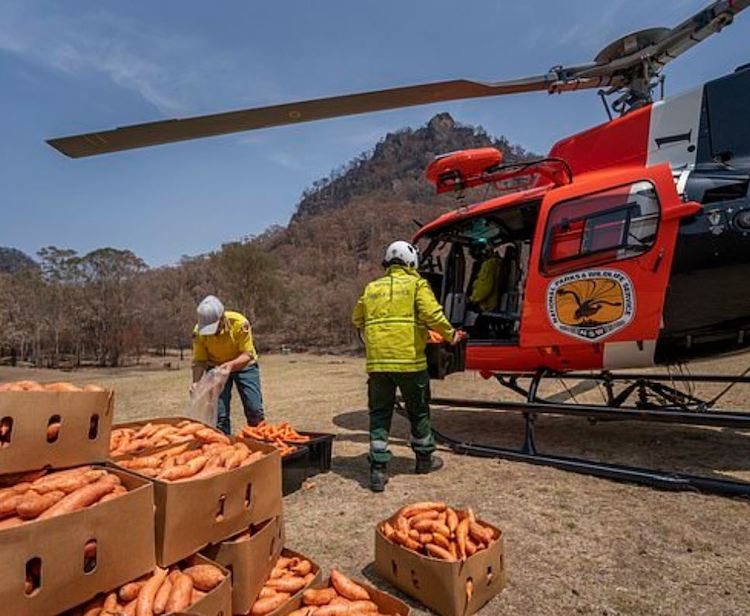