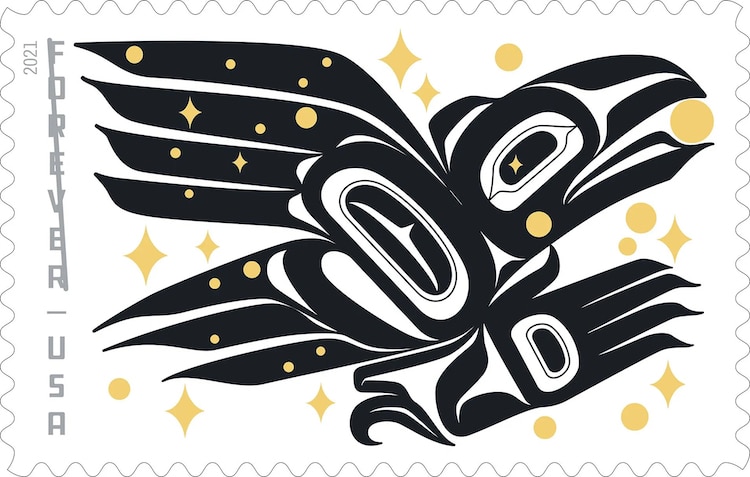 The U.S. Postal Service recently announced the upcoming stamps for 2021, and for the first time in history, the collection includes one designed by an Alaska Native person. Tlingit (“People of the Tides”) and Athabascan artist Rico Lanáat’ Worl created the Raven Story stamp, featuring a black bird with a star in its beak. The Raven is of great significance to the Indigenous peoples of the Northwest Coast and it features in many Tlingit stories. This specific motif is inspired by one tale in particular: Raven and the Box of Daylight.

As the story goes, a long time ago there were no celestial light sources and people lived in darkness. Raven heard of a chieftain who owned a private collection of stars, the moon, and the sun, so he set about trying to steal the treasure to bring light to humanity. Raven was born a child, but transformed into a bird during the most crucial part of his story. Worl’s stamp depicts this pivotal moment when Raven transforms as he flies among stars.

“Raven is trying to grab as many stars as he can, some stuck in his feathers and in his hands or in his beak. Some falling around him,” explains Worl. “It's a frazzled moment of adrenaline. Partially still in human form, as depicted as his hand still being human, as he carries the stars away.”

Rendered in a traditional style with modern elements, Worl’s stamp design celebrates Tlingit heritage and invites people to learn more about the Alaskan Native people. The artist says, “I knew that a stamp meant that the design would be on a platform with a national audience, so I wanted to be sure to create a design that was a gateway for people to learn about Tlingit Culture!”

All images via Rico Worl.

People Are Creating Their Own Wickedly Funny Brexit Stamps