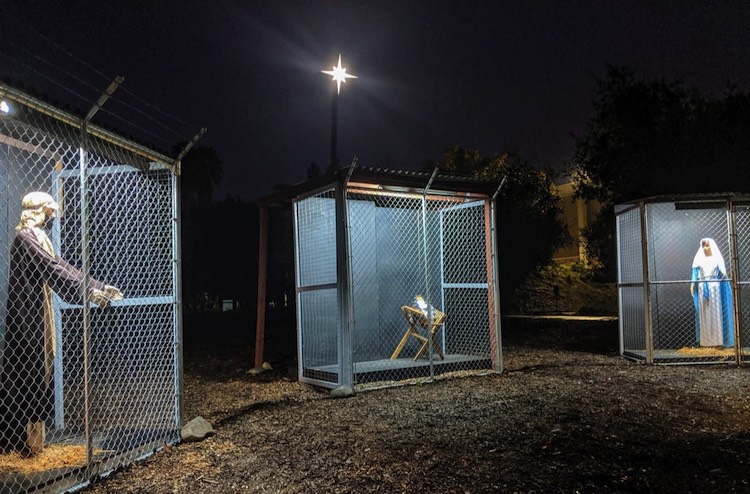 Nativity scenes are a long-held tradition to celebrate the holiday season, but one church is using theirs to send another message about compassion. In California, the Claremont United Methodist Church has set up a non-traditional scene that speaks to a timely topic—the treatment of refugees. Instead of uniting together under one roof, Mary, Joseph, and the baby Jesus are held separately in cage-like cells as a commentary on how refugee families are often treated by the United States government.

The image was shared on Facebook by Senior Minister Karen Clark Ristine along with the theological statement that accompanies the nativity. It reads, in part, “In a time in our country when refugee families seek asylum at our borders and are unwillingly separated from one another, we consider the most well-known refugee family in the world. Jesus, Mary, and Joseph, the Holy Family. Shortly after the birth of Jesus, Joseph and Mary were forced to flee with their young son from Nazareth to Egypt to escape King Herod, a tyrant. They feared persecution and death. What if this family sought refuge in our country today?”

What follows is a reminder of Jesus' teachings as written in the gospel of Matthew, where he opens his arms to all walks of life: “I was hungry and you gave me food, I was thirsty and you gave me something to drink, I was a stranger and you welcomed me.” The nativity scene is just one further extension of the work the church is already doing, as it regularly holds free immigration assistance and citizenship workshops. They've also raised over $100,000 to assist with the legal representation of separated families.

The powerful scene is a reminder by the church that over the past three years, over 5,500 children under the age of 2 have been separated from their parents at the U.S. border. This controversial action, when transposed on the Holy Family, makes for a particularly powerful statement and is a call for compassion to Christians around the world. Luckily, in the church's world, there is a happy ending. Once inside the church, the Holy Family has been reunited. One can only hope that many of the separated refugee families also have this same opportunity.