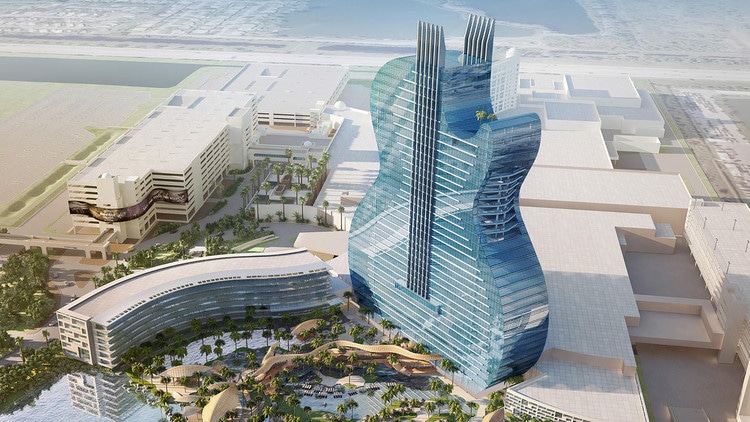 Preparations are underway for what will be the largest guitar shaped hotel at Florida's Seminole Hard Rock Hotel and Casino. The plans were unveiled to great fanfare, with fireworks and guitar smashing to celebrate what the hoteliers have fought for since 2007. The new 638-room hotel will be a spectacle of Hollywood, Florida, as the building curves up to form the body of a guitar.

Designed to appear as two back-to-back guitars, the structure will measure 450 feet high when complete and will also boast a 41,000-square-foot spa complex for guests to enjoy. The bold design is the vision of  James F. Allen, CEO of Seminole Gaming and Chairman of Hard Rock International. “I said, ‘We are talking about a building that is actually shaped like a guitar,' ” Allen shared at a preview event. “This is another time in my life when people thought I was certifiably crazy.”

But now, his vision is becoming a reality. “We think the architectural design in itself creates an amazing attraction,” he said. “There is truly, with zero exaggeration, nothing like it in the world.”

Due to open in 2019—at a cost of $1.5 billion—the expansion will double the rooms at the hotel and gaming space at the casino. In addition to enjoying their stay in the guitar-shaped building, guests will also be able to spend time in a new 10-acre pool complex that is part of the project. It will include private cabanas, butler service, multiple waterfalls, and water sports. As the spectacle unfolds, Allen hopes to be able to attract large-scale productions to the Seminole Hard Rock, making it an international entertainment destination.

Quirky South Korean Cafe is Shaped Like a Rolleiflex Camera