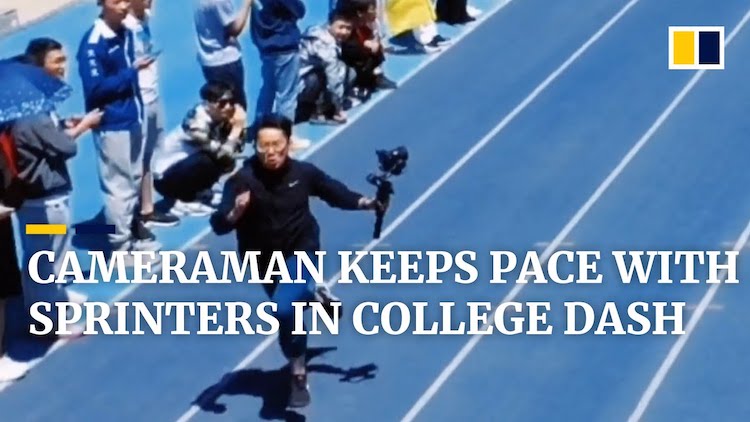 During a sporting event, all eyes are usually glued on the athletes; meanwhile, sports photographers and videographers are covertly working in the background documenting the event without distracting from the competition. However, in a race conducted at a university in China, all eyes were on the cameraman. The cameraman, who was a college student from the Datong University in Shanxi province of China, stole the show after he outran the sprinters in a 100m race. In a video that has now gone viral, the cameraman outran the sprinters all while holding a camera on a gimbal.

The college student videographer was in charge of capturing a 100-meter racing event held in his campus. He was positioned in an outside lane and began just a short distance ahead of the student athletes. When the gun fired, the videographer began sprinting alongside the athletes towards the finish line in an attempt to capture them with a steady, outstretched arm holding the gimbal-mounted camera pointed at the runners.

In addition to the pretty impressive sprint, the cameraman held the camera rig, which reportedly weighed over 4kg (8.8 lbs.) up while continually looking over his shoulder to see if the runners were keeping up with him. He was also not appropriately dressed for a sprint, but he kept his pace, maintained the gap, and actually would have crossed the finish line first if he were competing. What a photo finish that would have been!