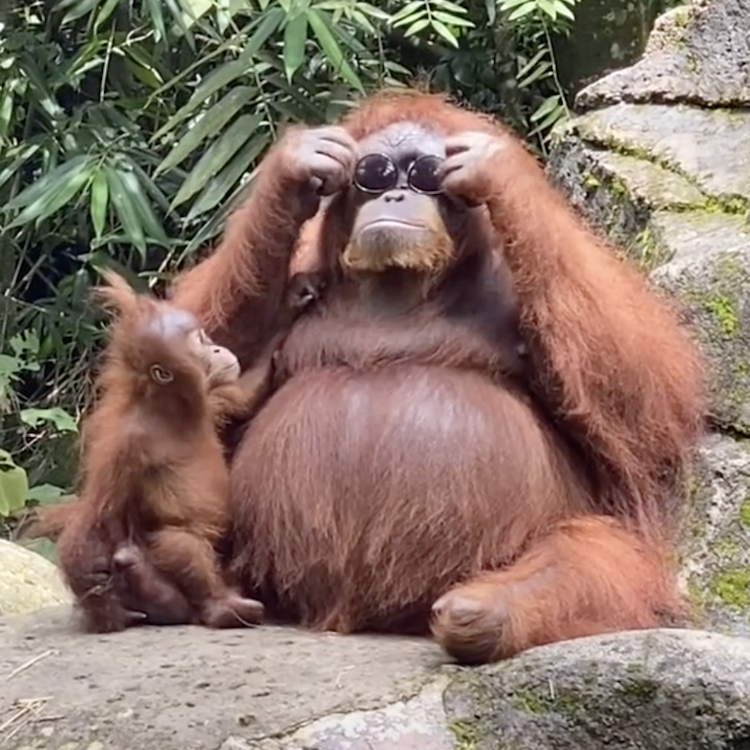 Sometimes it’s startling just how like us our primate cousins can be. And recently, one TikTok user found that out in a most amusing way. While visiting a zoo in Indonesia, Lola Testu—known as @minorcrimes on TikTok—accidentally dropped her sunglasses into the orangutan enclosure. Naturally, she captured the entire mishap on video, which is fortunate because what happened next is absolutely priceless.

Curious about the newfound object, an inquisitive orangutan made its way over to investigate. “Oh no, don’t eat it! Oh no!” Testu exclaimed, worried that the creature’s first instinct would be to consume the mysterious item. The plucky primate picked up the glasses and brought them towards its face; however, in the very next moment, Testu gasped in surprise as the great ape placed the broken sunglasses on its face rather than in its mouth.

The now-viral clip goes on to show the funny orangutan trying on the sunglasses in a variety of different ways, even putting them on upside down and backwards. In a portion of the video, it even has to swat its tiny baby orangutan’s hands away as the little one tries to have a closer look at the shades for itself. Again, Testu’s commentary can be heard in the background as she laughs at the unlikely scene. “This is fantastic stuff,” she exclaims. “Oh my gosh. They’re working the sunglasses! This is gold!”

The internet couldn’t help but agree. The video quickly went viral, amassing over 45 million views and 11 million likes in a matter of four days. Several commenters were surprised at just how smart the orangutan was to know exactly how to put the sunglasses on, while others remarked how similar the primates are to humans—even down to the baby trying to take the glasses for itself.

These similarities shouldn’t be too surprising considering the fact that orangutans share 96.4% of our genes. This video just proves, in the most entertaining way, that these highly intelligent creatures are like us in a lot more ways than we thought.

A TikTok user accidentally dropped her sunglasses and a funny orangutan tried them on! Watch the full video here: