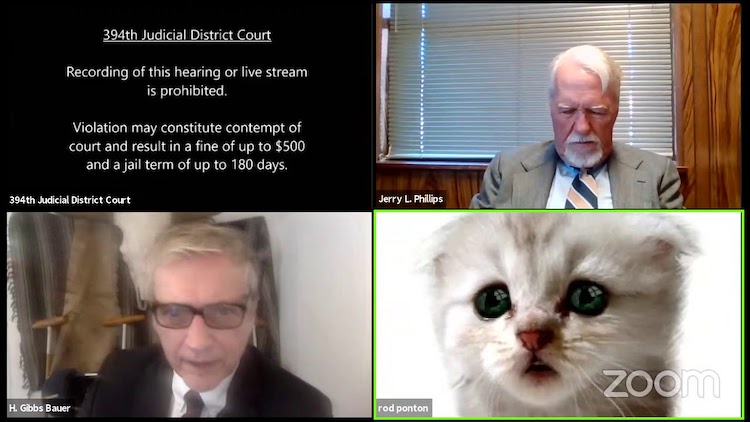 Due to the pandemic, many of us are forced to work from home. Attending meetings via virtual platforms like Zoom might be a welcome change for some, but for others, video calls can be an awkward experience. Take Lawyer Rod Ponton for example. He showed up to virtual court in the 394th district of Texas looking a little unusual. He had a cat filter turned on, but he wasn’t kitten around—it was a total accident!

“Mr. Ponton, I believe you have a filter turned on in your video settings,” Judge Roy Ferguson says. “Can you hear me judge?” responds the cat/lawyer. “I can hear you,” Judge Ferguson says. “I think it’s a filter.”

Even disguised as a kitten, Ponton looks understandably flustered by the filter mishap. His huge kitten eyes twitch back and forth nervously as he tries to solve the issue. “I don’t know how to remove it,” Ponton says, while the cat’s mouth moves in unison. “I’ve got my assistant here and she’s trying to remove it.” However, in a bid to not waste any more time, the purrfessional was willing to press on with the proceeding with the filter still on. “I’m here live,” the attorney reassured the Judge. “I’m not a cat.” After a long pause, the judge responds, “I can see that.” Meanwhile, lawyer Jerry L. Phillips in the upper right-hand corner of the screen looks up and grins.

In response to the now-viral video of the hilarious moment, Ponton assures that he was eventually able to remove the kitten filter. “Oh, that was just a mistake by my secretary,” he says. “I was using her computer and for some reason she had that filter on. I took it off and replaced it with my face.” Meanwhile, one of the other attorneys on the call, Gibbs Bauer, also seemed a little confused by what had just happened. “I have no idea what caused that,” he says. “Probably just a computer glitch.”

Judge Roy Ferguson also made a comment: “These fun moments are a by-product of the legal profession's dedication to ensuring that the justice system continues to function in these tough times. Everyone involved handled it with dignity, and the filtered lawyer showed incredible grace. True professionalism all around!” Ponton clearly agrees, as he's told The New York Times, “If I can make the country chuckle for a moment in these difficult times they’re going through, I’m happy to let them do that at my expense.”

Just remember, if you’re ever in trouble with the law; you have the right to a cattorney.

A virtual court hearing in Texas was recently delayed when Lawyer Rod Ponton accidentally showed up with a kitten filter turned on.

IMPORTANT ZOOM TIP: If a child used your computer, before you join a virtual hearing check the Zoom Video Options to be sure filters are off. This kitten just made a formal announcement on a case in the 394th (sound on). #lawtwitter #OhNo @zoom_ushttps://t.co/I0zaj0wu6K

Lucky for everyone on the Internet, the hilarious moment was shared online.

The internet laughed collectively and some people had equally funny reactions.

I on the other hand am a cat. I just can’t get this human filter off.