If anyone is alone today and feeling lonely, you are invited to my Thanksgiving dinner. I made lemon & rosemary turkey. Tell me your hair & eye color & what you’re bringing, & I’ll draw you in. pic.twitter.com/DCgJUUICwe

This year has been quite difficult for many people, with isolation and loneliness becoming two of the most prevalent side effects of the COVID-19 pandemic. And with many people choosing to practice safe habits and social distance rather than participate in any gatherings, Thanksgiving was sure to be a difficult day for much of the population. But Twitter user Jessica Kantrowitz—self-proclaimed writer, theologian, and table-drawer—sought to bring people together on the holiday by inviting her followers to a virtual Thanksgiving feast.

She drew a simple stick figure of herself at her dinner table and shared it on social media. “If anyone is alone today and feeling lonely, you are invited to my Thanksgiving dinner,” she tweeted. “I made lemon & rosemary turkey. Tell me your hair & eye color & what you’re bringing, & I’ll draw you in.” The post quickly gained traction, with people commenting their dish of choice and physical description so that Kantrowitz could add them to her table. What started as a party of one quickly grew to a party of over 50 people, with hundreds more engaging in the comments (although not all of them could fit into the drawing).

“I was pretty sure I had friends and followers who would want to join me, but I was surprised by how big it got,” Kantrowitz admits. “I think I have something like several thousand people still at my ‘house’ having leftover turkey sandwiches! Thankfully, several people have also volunteered to do the dishes.”

Kantrowitz’s post brought cheer to what was sure to be a very lonely day for many. And even those who didn’t participate were touched by the gesture, with one user commenting, “Thank you for this delightful thread. I give thanks today for people like you who make the world brighter.”

The world is indeed a brighter place thanks to Kantrowitz’s kind action. Scroll down to see some snapshots from the gathering.

Twitter user Jessica Kantrowitz decided to bring people together on Thanksgiving by inviting them to a virtual feast. 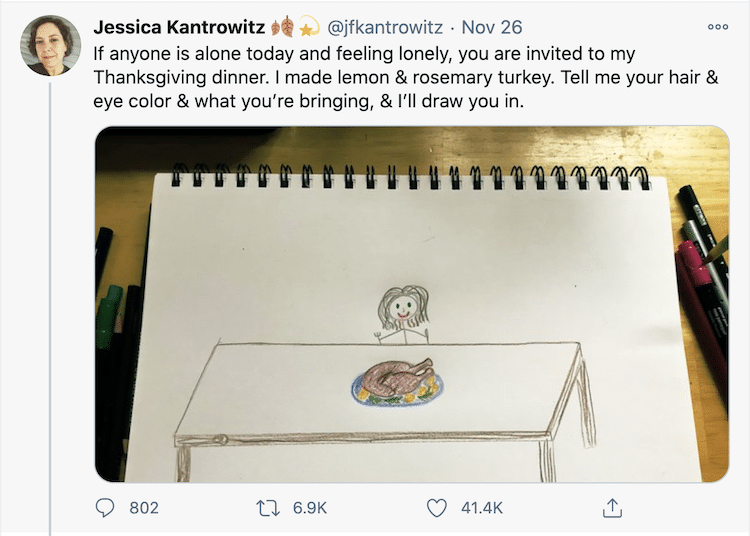 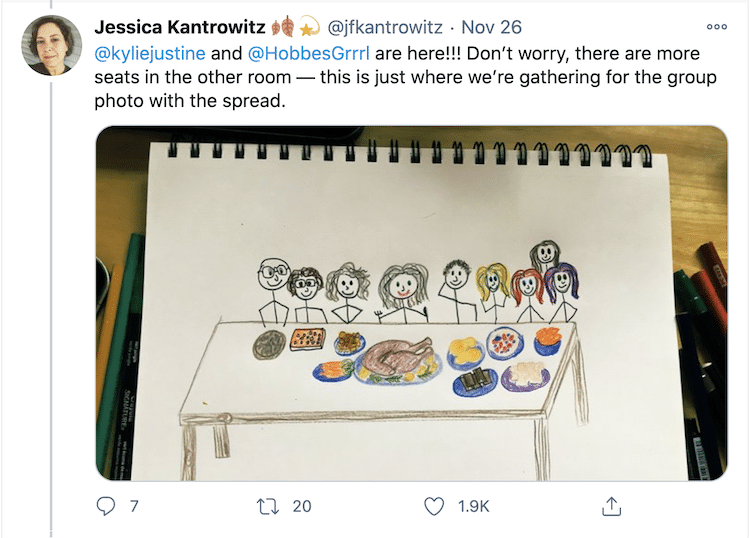 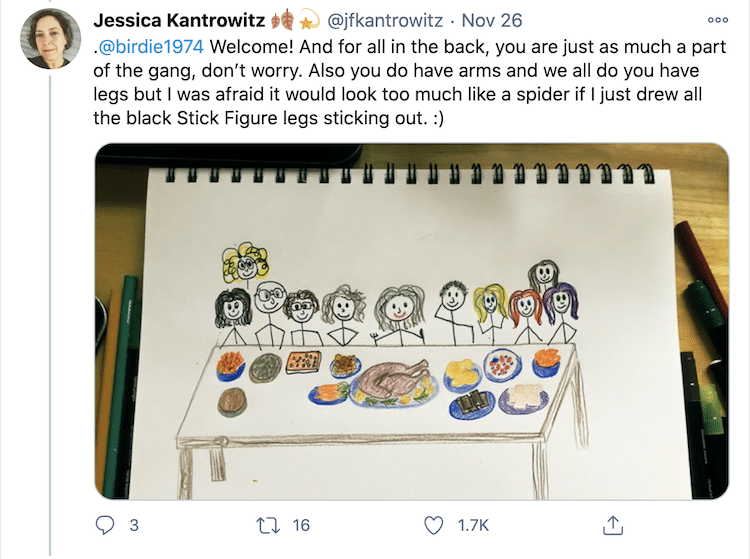 She drew herself alone at the dinner table and added in her guests as they commented their physical description and what dish they were bringing. 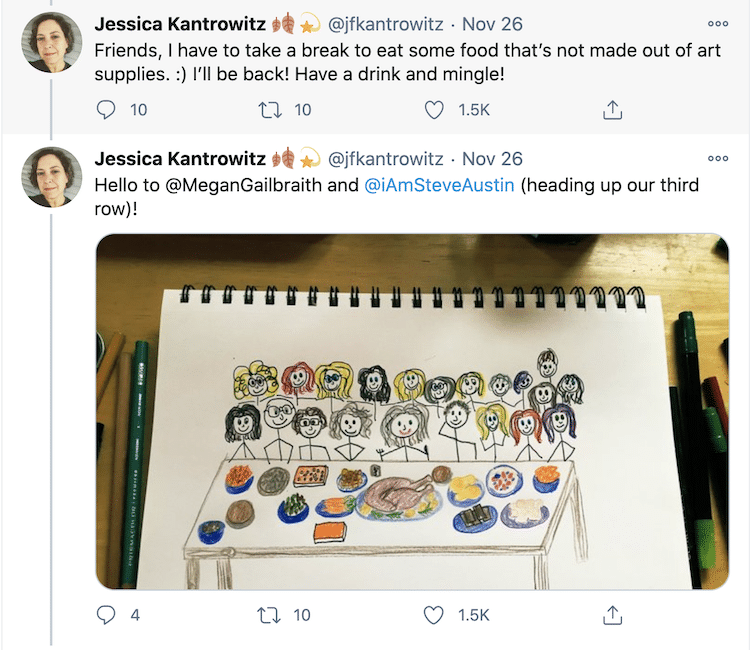 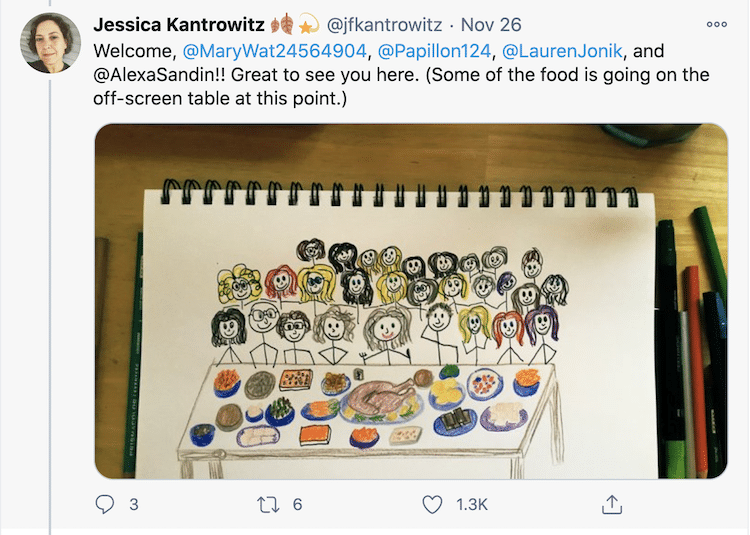 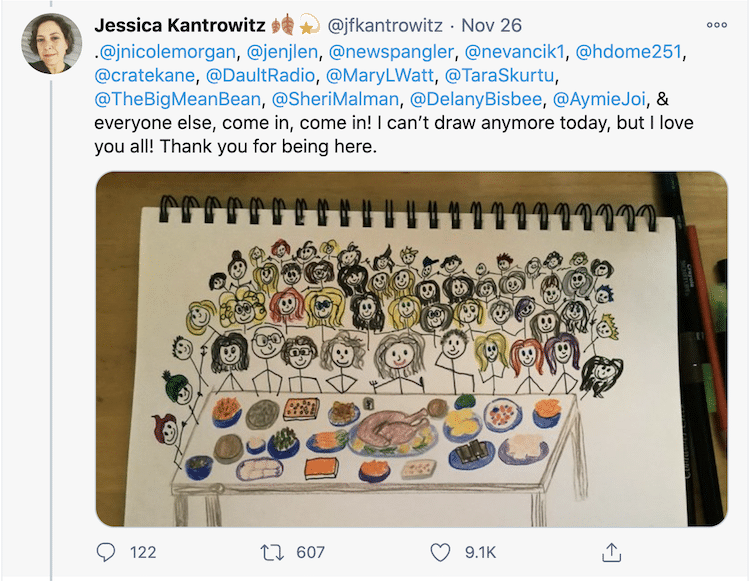 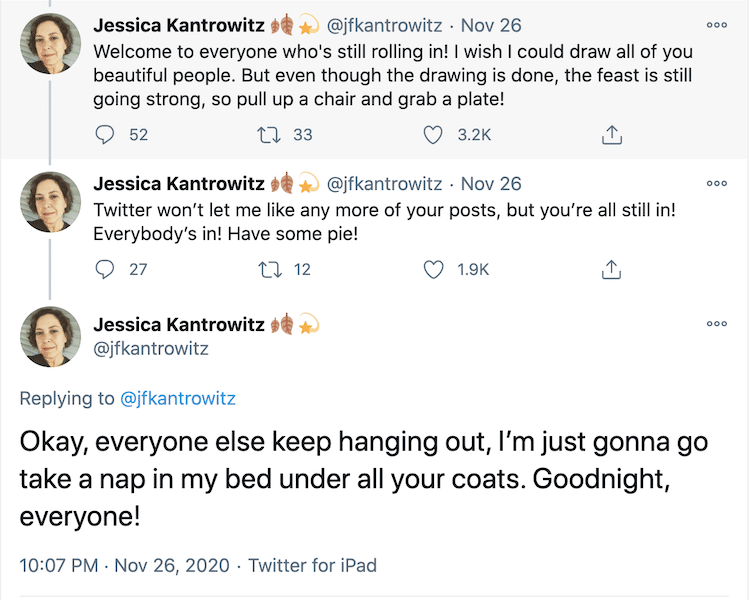 The party quickly grew as hundreds and thousands of people commented, liked, and shared the post.

I enjoyed this thread so I made a gif for it. Happy thanksgiving 🍁 pic.twitter.com/oXZMqNLU4R

All screenshots via Jessica Kantrowitz.